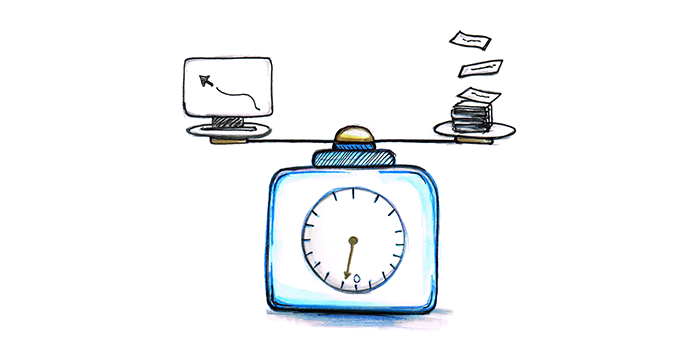 Have you ever suggested doing an online card sort and been told no ‘because the conversation in the room is the most valuable part of a card sort’?

I have. Repeatedly. I decided it was time someone actually tested that theory. So when the opportunity came up at work, I jumped on the chance to run this experiment.

My research task was to determine the information architecture (IA) for a business line’s area of the workplace intranet. I ran an A/B test with five face-to-face moderated card sorts, each with 2-3 users, and I ran twenty-five online card sorts using OptimalSort. I chose OptimalSort because I’d never used it before, and since I enjoyed using Treejack so much I thought I’d try it out.

There were forty-five cards in total. I conducted both tests using only the resources available, mostly of the human variety. In this piece, I examine the benefits and challenges of both techniques.

Benefits of moderated card sorts — the gold is in the conversation

The opportunity to speak with users in person

I love meeting users. It reminds me of why I do what I do and motivates me to continuously improve.

All five groups of 2-3 people worked well together and nobody had any reservations about sharing their thoughts. Each session was productive. I listened carefully and asked questions to help me understand why decisions were being made.

Working with paper. There’s something satisfying about moving pieces of paper around on a table and being able to cross things out and add new cards. The overall picture is so much clearer when the cards are all spread out in front of you. Users are more inclined to criticise the work at this early stage when it’s on paper and looks unresolved. It’s also inexpensive. Moderated card sorts allow you to spread all the cards out on the table in front of you and narrow it down from there.

Challenges of moderated card sorts — oh, the time, the time it took!

I can sum this one up in two words: cat herding

Recruiting and organising users for the face to face card sort sessions took almost three days to complete! It was not easy trying to organise fifteen people into groups of three let alone book session times that everyone could agree upon! Even after all that, a few of the sessions still had no shows. I can forgive people their busy lives, but it’s still frustrating.

No matter how carefully and patiently I explained to the users that we were just grouping like things together, many felt the need to construct a tree structure. I chose to run this study with a flat hierarchy, for the purposes of understanding what belongs together and how users would name each high level group of information.  It’s like as soon as users hear the word ‘website’ they have trouble detaching from what they know. Ultimately I solved this problem by sketching instructions on the whiteboard for each session. This gave users something visual to refer to and kept them focussed on what we all needed to achieve during the session.

My office was fresh out of barcode scanners

I would have loved to have tried the moderated card sort the OptimalSort way with the barcode scanner, but unfortunately I just didn’t have access to one. As a result of this, I had to manually input the cards retrospectively from the moderated sorts into OptimalSort to take advantage of the amazing results graphs. That took a few hours. I know you can pick them up pretty cheap, so I’ll be prepared for next time.

Benefits of online card sorting  — the fire and forget factor

This study received really positive comments from users that showed that they liked the activity were well and truly on board with the coming changes. Presenting positive feedback to executive staff is pretty powerful.

— ‘This was an interesting exercise, thanks! I’m glad I got to do this individually via the online approach, rather than having to discuss it in a group: I much prefer solo activities to group ones, as it usually takes less time.’

— ‘Logical grouping is extremely important in finding information. I’m pleased you are looking at this.’

The fire and forget factor

While it is entertaining to refresh the browser every five seconds to see if it has changed, OptimalSort really does take care of itself. The provided instructions are very useful and I did not receive a single phone call or email asking for help. This gave me time to start putting together the report and work on other projects, which saved both time and money.

The presentation of the results

You really can’t go past the beautiful yet useful way OptimalSort presents the results. These are charts that carry serious thud value when presented to management or executives because they back up your findings with actual numbers. The charts also make it incredibly easy to interpret the results and start iterating the next phase of the design.

My personal favourite is the PCA (Participant-Centric Analysis) tab on the results dashboard. It provides advice on what you could do next when building your IA. Basically, if OptimalSort had to pick a winning user submission, the first one would be it. It makes taking the next step in the design process that much easier.

The high abandonment rate seen in this study

This study closed after one week with twenty-five completed responses and thirty abandoned responses. This is quite high; however I honestly don’t believe the tool itself to be the culprit. Of the thirty abandoned responses received, twenty-one of those participants ended the activity having sorted less than 5% of the cards. Of that number, twelve participants ended the task not having sorted any cards at all. This tells me that they may have been overwhelmed by the size of the task and felt unable to complete it, especially since they were at work after all and had competing priorities. Drawing on this experience, next time I will keep the survey short and sweet to avoid overwhelming the user.

I have a rule around online testing activities. All recorded responses are anonymous — even from me. I do this because I want users to feel comfortable and be willing to participate in future testing activities. I also feel that it preserves the integrity of the results and doesn’t allow for assumptions to come into play. Because of this, I don’t know who responded with what and I can’t ask questions if I’m not clear on something. Had I included some targeted post survey questions, this issue would have been avoided.

Our brand colour and the submit button were too similar

I always try to use softer colours to avoid scaring people on the opening screen, but you have to be careful with this one.  The background colour is [Ed: was!] also the colour of the submit button on the card sorting screen and it appears against a black background. Choosing a colour that looks nice on your opening screen will not do you any favours when that same colour appears on the submit button and does not contrast well against the black background. Beyond the obvious accessibility issue, you also risk committing the crime of playing ‘Where’s Wally?’ with the user when they can’t find the button!

This challenge does however have a happy ending. I mentioned this issue to Optimal Workshop and they fixed it! How awesome is that?!

So, are the two techniques best friends or mere acquaintances?

They complemented each other! Despite the differences in delivery methods, both sets of card sort results told a similar story and each enriched the overall picture. There were no show-stopping differences or contradictions between the two.  The themes of comments left in the online version also matched those overheard during the conversations in the moderated sorts.

— ‘I was unsure what a couple of these actually meant; I would rename them to make their meaning explicit.’ Comment left by a user from the online card sort

— ‘There’s too much jargon! Make it real and use language that people understand.’ Comment made by a user during a moderated card sort

The biggest finding overall was that the user was grouping content by keywords and task related subjects. Not entirely groundbreaking information on its own, however it does break the current model which groups content by organisational structure and product owner. This study indicated that the users don’t see the organisational structure; they just want to solve a problem or find information without having to think about where it lives or who owns it.

This research is valuable because we can now back up our design decisions with evidence. We can use this information to construct an IA that will actually work. It has also provided insights into user workflows and their understanding of the organisation as a whole.

So, there you have it: mystery solved! But which card sorting activity wins?

My recommendation: Get the best of both worlds

You still type your card labels into OptimalSort, but the difference is you print them out and each card has a barcode on it. The next step is to run your moderated card sort as you normally would.  Then using a common barcode scanner, you would scan the cards back into OptimalSort and reap all the benefits of the result graphs and analysis tools.

This approach gives you the qualitative face time with your users and the quantitative results to back up your thinking.

I really enjoyed running this experiment and I’m huge fan of A/B testing. I would love to hear your thoughts, and look forward to sharing my next discovery with you.

Putting employees at the centre of intranet information architecture

A quick analysis of feedback collected with OptimalSort

How can you run an unmoderated, remote card sort, but also capture the insights you'd gain from being in the same room?