Baby, You Can Park My Car: A vehicular taxonomy mystery 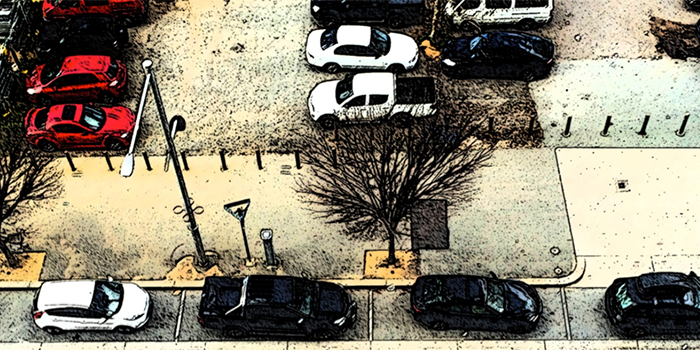 I recently moved desks at work and found myself lucky enough to score a window seat (yay!). The view is a pleasure, but an extra joy was the research question it sparked in my mind within a few days of moving. My new desk overlooks a large open air car park (200+ spaces) in the heart of the busy Canberra CBD. It’s a popular, usually-full car park that always hosts a line of cars queuing in hope of a free space. It’s surrounded by large office buildings and a shopping mall, and also happens to be across the road from an underground car park (the open air one is cheaper). After a few days of watching this car park, I noticed that similar coloured cars were consistently parking next to each other. Yes, that’s right: coloured clumps of cars were appearing every day. I wondered if it was deliberate. Were people actually parking near similar looking cars to their own, or was I seeing patterns that just weren’t there? And if they were deliberately parking that way, were they even aware of it? The piece of the puzzle that had me really curious was that this car park is really popular and often quite difficult to find a space in — thus, a mystery. Of course, being a UX researcher and designer, the obvious way to answer my questions was to do some research. I decided to go at it from two angles: by speaking to users of the car park and my office neighbours. And by running an OptimalSort card sort to determine how people group cars and other vehicles together.

My first task was to actually speak to the users of the car park. Working in an open plan office across the road from it meant I didn’t have to search too far from my desk to find people to talk to. The people I spoke to confirmed how difficult it is to find a space in the park. But when I asked if they noticed anything unusual about the car park as seen from our office,  no one did. So I prodded them by asking ‘What about the colours?’ A couple of people then noticed patterns and blocks of colour…but many thought I had just been sitting in the sun too long. No users of the carpark that I spoke to were consciously aware of the way they were parking. One user, whose red car was parked between two other red cars that day, told me: ‘I just park where I can find a space — and that’s if I can actually find one.’ The people who use this car park typically grab the first space they can (and the quicker that happens the sooner they get their morning coffee) so I was bit stumped.

I then wanted to see how people would group cars and other vehicles if the car park itself wasn’t a factor. To determine this, I ran an OptimalSort study using images of cars as the cards. I searched high and low through Google images to make sure I covered as many different car sizes, types, and colours as I could. I wanted to cover a broad spectrum of colours, and I also included custom paint jobs and show cars. I even threw service vehicles like non-standard police cars and fire engines into the mix to see what would happen. So, what did happen you ask? None of the participants grouped the cars by colour. Zero. I laughed aloud when I saw the results because it was so unexpected. I looked first at the PCA (participant-centric analysis) results to find out what the most agreed upon submission was. Of the 39 completed card sorts, the most common categories were size, function, price, and era.

Another common category created by most participants was what I call the ‘too-hard basket’ cateogory — groups with names like ‘Other’ and ‘Doesn’t fit in other categories I have’. I found it interesting that I could see groups within these sorts that other people may not see, colour-wise in particular. For example, nine cars in the following ‘too-hard basket’ group are white or silver, which was an obvious potential category from my perpective.

(Of course, whether or not I would have considered this category obvious if my focus for research wasn’t on colour, we’ll never know!)

So am I seeing things that just aren’t there?

No. And I’m definitely not the first person to make a connection like this while staring out a window. A little over 100 years ago, in 1910, a psychologist named Max Wertheimer was travelling through Germany by train while on holiday. He was gazing out the window, and then had quite a moment when he noticed the flashing lights at a railway crossing. They reminded him of the way the lights encircling a movie theatre marquee appear to be a single light travelling around in a circle, but are actually a series of bulbs flashing on and off. He was so taken by what he saw that he got off the train in Frankfurt and stayed there for five years. In that time, he made some friends (Kurt Koffka and Wolfgang Köhler) and together they went on to develop Gestalt Theory. Gestalt theory is a set of principles that explain how humans visually perceive objects and form groupings.

How Gestalt Theory helps to explain my observations

My observations of the car park are a prime example of emergence. Emergence is a key property of Gestalt theory, and is used to describe the instance of the whole being identified before the parts. When I looked at the car park out the window, I saw a large chunk of colour before I saw the individual cars. The Gestalt principles that best explain my observations are a combination of Similarity and Proximity. As Andy Rutledge explains, the Gestalt principle of similarity states:

When I saw the large chunks of colour before the individual cars, it was because my mind formed relationships between the cars based on the similar shades of colour. Not everyone would perceive that similarity. Others may connect dots between the sizes of the cars. For example, imagine how a colour-blind person would perceive similarity in the car park! Around half the people in my office that I spoke to saw the same patterns that I did. The Gestalt principle of proximity strengthened this idea in my mind, because the cars were also close together. The principle of proximity states:

So that answers the question of why I saw what I saw. But what about the drivers? For this study, I took photos of the car park almost every (working) day for the last three months. Why is it that on the 28th of November, five blue cars happened to be parked side by side? (Yes, these are the kinds of thoughts that occupy me as a researcher!)

The answer could be simple chance, of course. But my instincts say otherwise, so more research it is! I’m no psychologist, but I can’t shake off the suspicion that the drivers see the same patterns that I see in the car park; that on some level they are making those connections too, whether they are aware of it or not. And the more insights we can get into the subciouscious decision-making habits of our users, the better for our designs. I’ll leave you with this card from the OptimalSort study, simply because I love it! One participant grouped it all by itself and labelled the category as ‘Cute Alien Pod’. I think that pretty much sums it up!

You don't have to choose between online and offline card sorting. In fact, the 2 approaches complement each other.

We've just added a powerful new analysis feature to OptimalSort, one that’s never been seen before and will give you a totally new perspective on your data.